How to build a racetrack 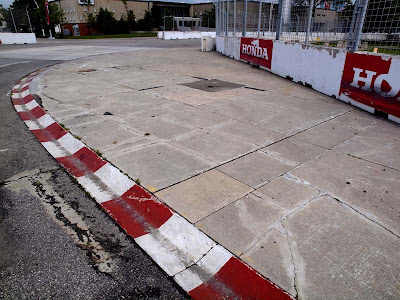 It's always seemed to me that building a street course is like trying to make a couture dress out of the contents of someone's sewing basket, or building a sports car out of car parts found in the back of a garage. You can't do it with just any sewing basket or garage, so your odds of success will always be slim, and even if it works, the result will always have something ... odd ... about it. Something ad hoc, even unfinished.

You can't even compare street circuits to their closest cousin - rally stages. Rally stages only require the consent of locals, a handful of flags to mark the course and track marshalls to wait for accidents; maintenance is beside the point, and no racer expects to drive on anything but a nasty, challenging dirt track. A street circuit, on the other hand, has to be massaged expensively into existence, maintained despite being dismantled for the rest of the year, and exists mostly as an act of will on the part of race organizers, city officials and fans. 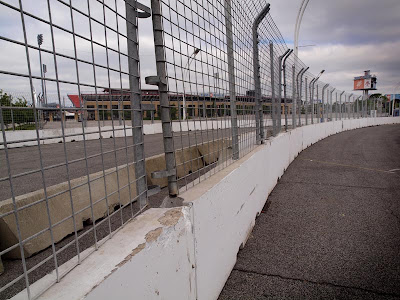 And yet we love them, if only so we can see someone tear through streets at wild speeds that we drive timidly and lawfully (hopefully.) As proper race tracks and speedways close down or move further from our city limits, road courses are a chance for race fans to stake out their turf for one weekend a year, maybe, and remind everyone else what they could have if the local racetrack, built in what were once farmer's fields, hadn't been shut down after years of noise complaints from its new suburban neighbours, its hairpins and banked turns bulldozed and turned into townhouses or a Wal-Mart parking lot.

Toronto's downtown Indycar circuit is over twenty years old and has survived despite complaints from locals mysteriously indifferent or even hostile to the song of unmuffled V8 engines. The track is carved out of just under two miles of street and laneways that are part of the Canadian National Exhibition grounds - Ontario's equivalent of a state fair - and a long stretch of lakeside boulevard. 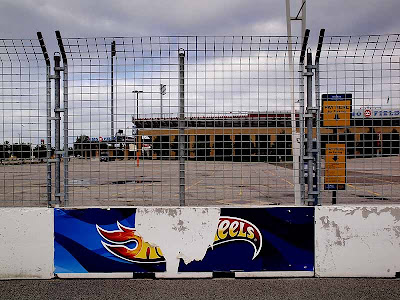 It's not the fastest track around, and it doesn't offer much in the way of elevation changes or even scenic streetscapes. In other words, it's no Monaco. But it's ours, and as long as someone - Indycar, in this case - is willing to put it on the schedule and city hall is willing to broker a weekend's worth of coexistence between gearheads and killjoys, it's the racing highlight of my year. 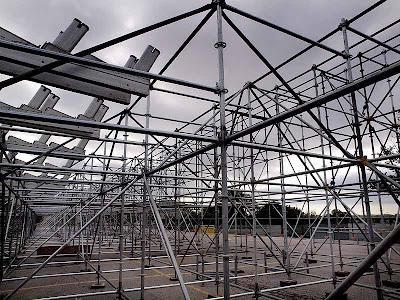 They began building the course six weeks ago, at a press event where a group of workers and a forklift ceremoniously began assembling the south wall of the start/finish straight. As with anything like this, the numbers are impressive: Over 2,000 concrete barriers withing almost 9,000 lbs. each, 1,200 sheets of fencing measuring over 14,000 feet, 1,600 feet of tire wall and 5,000 metric tons of asphalt to patch up the potholes and cracks that happen on regularly-used roads in a city with a brutal winter freeze-thaw cycle and a fleet of salt trucks. 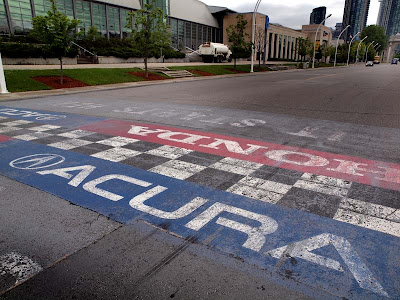 A few weeks after the press event, I walked around the track to check out the progress on an overcast June morning. I couldn't see any of the 200 track workers on site, but they'd made some progress, building about a third of the safety barriers and most of at least two of the grandstands. 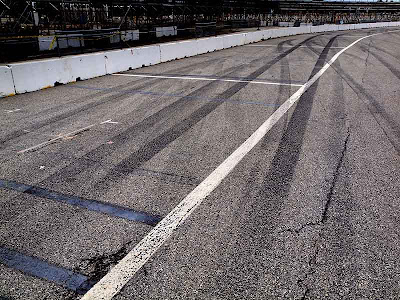 On the asphalt by pit lane, the ghosts of last year's burnouts still marked the ground, and the checkered line of the start line was still there, as weathered as the red-and-white lines marking the corners. A few of the concrete barriers still bore traces of last year's vinyl advertising, and the welds on the manhole covers still looked fresh, even if they'd been cut back open almost eleven months ago. 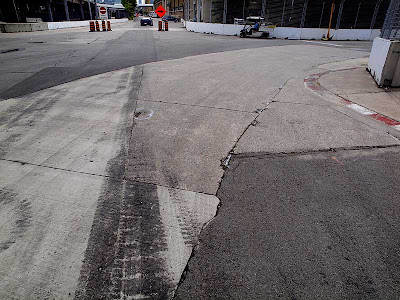 The racing surface certainly looked sketchy, with big patches of concrete at high speed corners and cracks worming their way through the asphalt almost everywhere. Still, this is probably one of the best-maintained road surfaces in the city, warts and all, but I can't imagine what it's like to race it at up to 180 mph on slicks, never mind in the rain. The tightest corners look barely as wide as two cars, and the concrete and steel fencing makes any mistake a likely car-wrecker.

Which is why we probably love street tracks: They're unlikely and endangered and unforgiving, and they showcase the fact that race car drivers are people who do really crazy things really well, at speed, at nearly any place where we're willing to build an oval or block off some streets and say, "Go ahead, but try not to get yourself killed."
Posted by rick mcginnis at 2:02 AM